Grow Your Own Mulch   Rough Mulch   In-Situ Mulch
Bare soil is a bad idea, it is vulnerable to erosion. Weeds are nature's answer to protect the earth, so always try to get in first with mulch. No-one needs the additional workload of weeding when planting and sowing is so much more satisfying. Mulch will also improve your soil by: Select different mulches for different areas of the garden. Mulches generally have a high carbon content so that it decomposes relatively slowly and won't need constant replacement. High carbon choices include grass hay, straw and bark mulch. Sawdust is unsuitable due to its tendency to be water repellent and its usually acidic pH. If mixed with other materials it can be a suitable mulch under fruit trees. Eucalyptus bark mulches are useful under native shrubs, but may retard the growth of sensitive, non-native plants. Straw or grass hay mulches are useful in the vegetable garden. Gravel or pebbles are a good mulch for dry or fire-prone areas.
Using newspaper and cardboard as an initial layer of mulch will dramatically increase the period of time before weeds start to show through. A carpet of newspaper, part of the 'sheet mulch' technique, can be used where there are existing weeds and grasses, such as under a fruit tree. If the grass and weeds are long then start by mowing. Then spread an organic fertiliser or compost, make sure the soil is moist. Next tile the area under the tree with paper or cardboard, from the trunk to just past the dripline. This is a good way to reduce household waste paper entering the waste stream and instead return the carbon to the soil. Cover the scrap paper layer with mulch. There is no advantage to weeding first because the weeds will decompose and add to the organic matter. Even better, the roots of the weeds will decompose and add organic matter deeper down in the soil. The decomposed roots then become passageways through the soil for air and water to penetrate. Earthworms love the cardboard treatment and it encourages them to stay actively working to improve the soil for longer in the warmer weather rather than retreating to deeper, cooler areas.

Grow Your Own Mulch 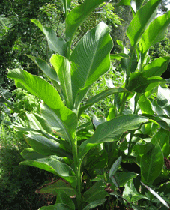 Growing your own mulch is sustainable, reduces costs and the risk of weeds being imported into the garden. Shrubby, nitrogen-fixing plants such as tree lucerne / tagasaste and pigeon pea can be cut regularly and laid directly on perennial garden beds or put through a mulcher first if you prefer a tidier appearance. Or you can simply lay them under fruit trees and top with hay mulch. All garden prunings are an important resource and should never leave your garden. Even woody branches will eventually decompose and add to the soil humus. It is always frustrating to see a burning pile of prunings becoming pollution in the sky, rather than enriching the soil.
Lush, fast growing plants such as arrowroot, lemongrass and comfrey provide abundant supplies of mulch and are easy to cut. It is useful to plant these outside the drip-line of fruit trees, on the downhill side, as they are then right where you need them to cut for mulch.
Arrowroot is a very hardy, tall, clump-forming perennial plant with thick stalks and large bright green leaves. It will grow in most areas of Australia. It is also useful as a weed barrier and low garden windbreak. Leaves can be fed to chooks and a large clump will become your flock's favourite hangout on a hot day as the thick green stems create a cool oasis.
Comfrey is a perennial herb with large, hairy leaves and mauve bell-like flowers. No organic garden should be without it! It has one of the widest range of uses in a permaculture system of any plant. Comfrey is lush and fast-growing in the right conditions and can provide abundant supplies of mulch. The leaves contain silica, nitrogen, magnesium, calcium, potassium, iron and when measured as dry matter, are about 15 to 30% protein which is as high as most legumes. 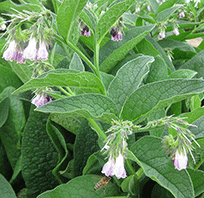 It is a useful addition to compost. The whole plant is an excellent soil conditioner, the roots penetrate deep into the subsoil and are able to access nutrients beyond the reach of more shallow-rooted plants. This allows the gardener to cycle nutrients leached from the topsoil back to the surface by cutting comfrey leaves and using them as mulch. This deep nutrient mining is particularly useful for the health of soils in heavy rainfall areas. The large, deep roots of comfrey will act to break up compacted soils. Plant comfrey downhill from poultry runs or animal pens to trap the nutrients that would otherwise be washed away in heavy rain.
Lucerne mulch is expensive and due to its high nitrogen content will break down rapidly. This feeds significant amounts of nitrogen to the soil, but means you may need to mulch again fairly soon. Layering a higher carbon mulch such as straw over the top of the lucerne will prevent the weeds emerging so quickly once the lucerne is absorbed into the soil; it will also protect the lucerne from the drying impact of the sun and loss of nutrient. The CSIRO pioneered a technique called 'Clever Clover' which recommends setting aside at least 1 bed in the garden for long term lucerne hay production. Lucerne is a legume with small, purple pea flowers and a strong, very deep taproot. In temperate areas sow seed from March to May or August to October; in subtropical areas sow May to July.

Rough Mulch
Rough mulch is the practice of spreading large, loose piles of woody twigs and branches, particularly tree prunings and legume bushes grown for this purpose, under fruit trees. It mimics the natural litter of the forest floor and provides a slow breakdown of nutrients. It does not usually cover the ground well enough to keep down weeds but is very useful combined with a cardboard and hay mulch. It is multi-purpose as it provides both habitat and the very important woody residues that encourage beneficial fungi in the soil. Fungi help to create a 'disease-suppressive' soil and are also important in improving soil structure. Fungi make up 70% of the soil's biomass. Fungal hyphae are the white threads that sometimes appear in compost heaps. They act to pull the soil particles together; this clumping effect also improves the passage of air and water through the soil. The habitat created by 'rough mulch' provides a home for a range of useful creatures. These can range from small insect-eating birds like pardalotes, lizards and soil dwelling predators, such as ground beetles and centipedes that control pests like fruit fly larvae. Fruit trees in warmer subtropical and tropical areas like this woody mulch so much that it not unusual to see the tree roots spreading into this litter layer of rich organic matter.

In-Situ Mulch
Growing a green manure crop not only builds soil fertility but can also supply mulch right where you need it. This is a strategy that works best for larger gardens as it takes an area out of production for a while. It might involve planting a green manure of woolly pod vetch and oats in winter and then early in spring, slashing it to the ground. The slashed green tops become the mulch for the next vegetable crop and the roots slowly decompose and release nitrogen to feed the crop. Another version of the CSIRO 'Clever Clover' involves planting subclover in a garden bed at the beginning of winter. It grows well and then naturally dies back as the weather warms, leaving a mulch on the surface. It usually regenerates the following autumn from self-sown seed. This works best in temperate areas. Green manures can also be used as a 'living mulch' under tall crops like corn. The advantage is the ground is covered and nitrogen is being provided for the growing corn crop. The disadvantage is an increased water usage. To plant a 'living mulch' first plant the corn and when it is 30 cm high, under-sow with cowpeas.