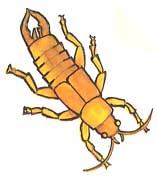 Earwigs are generally nocturnal and easily recognisable by the strong pincers in their rear end. Most native species are predatory while some, including an introduced species, are considered minor pests that feed on a range of fruit and vegetables. Overall, they are usually considered beneficial as their prey includes caterpillars. They hide in damp places, under leaf litter, bark and stones and in compost heaps; they lay their eggs in the soil.