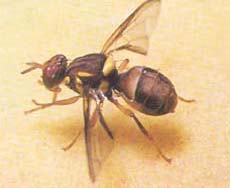 There are several pests described as 'fruit fly' in Australia. The main one in the eastern states is Queensland fruit fly (Q fly) Bactrocera tryoni, which is native to rainforest habitat on the east coast of Australia. Other pest fruit flies include the Mediterranean fruit fly (Med fly) Ceratitis capitata, an introduced species currently only present in WA and the Cucumber fly Bactrocera cucumis. Cucumber fly is a major pest of melons, pumpkins and zucchini, it is similar in appearance to Qld fruit fly but is a bit larger. The fruits most commonly attacked by Q fly and Med fly are figs, cherries, stone fruit, apples, pears, loquats, guavas, feijoas, tomatoes and capsicum. There are over 200 native species of fruit fly in Australia, only a few are a problem for gardeners but can be a very significant one.
Suggested Organic Strategies:
Handy Hint: The tiny flies that hover around the fruit bowl are fungal gnats, not fruit flies. 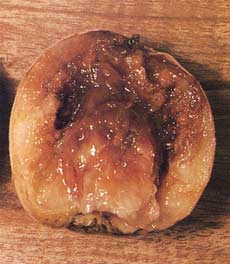 Fruit fly is responsible for more bad language from gardeners than any other pest. If you are lucky enough to live in a fruit fly free zone then count your blessings and do your bit to keep it that way. If you live in fruit fly zone, unless you are prepared to put in effort from year to year then a chainsaw may be your best solution. Fruit fly is a pest that needs a community approach; it could be the perfect opportunity to meet your neighbours for a street BBQ so you can plan a coordinated effort.

Lifecycle
Queensland fruit fly develop from eggs to adults within five weeks in hot weather, whereas Med fly take only four weeks. Female flies only need to mate once or twice in their lifetime, and can lay several hundred eggs. The eggs are laid in small groups just beneath the skin of the fruit. The maggots hatch and, through their feeding and the bacteria they carry, cause the fruit to rot and drop. When the maggots are fully grown they leave the fruit and burrow into the soil, where they pupate. Both male and female flies feed on sugars and can live for many weeks, the flies commonly over-winter as adults, becoming active when the weather warms up around August. The population gradually builds to a peak in late summer. 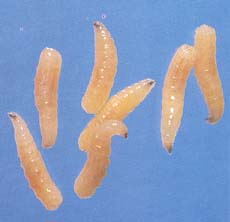 Least Toxic Chemical Controls
Fruit fly is such a serious pest, capable of destroying 100% of the crop, so one product alone may not give sufficient control, especially if the pest population was high the previous season. Other factors that influence fruit fly population are if the orchard is within 5 km of rainforest, or it is a highly susceptible crop such as tomato, rows of vegetables, stone fruit or large mangoes. In this case a combination of strategies and controls may be needed. At the beginning of the fruit fly season a cover spray with a product containing pyrethrum or spinosad should help to reduce fruit fly to more manageable numbers before putting up baits or traps to catch female flies. The advantage of this combination, is that whereas repeated spraying with pyrethrum would damage beneficial insect populations, only using it initially will reduce its impact.