How to create a pest-free, beautiful organic garden? © Frances Michaels

There are a series of simple strategies that can be used to create relatively pest-free, beautiful gardens. These strategies will only work if your attitude to gardening includes a willingness to learn about the beneficial interactions possible between plants and other forms of life. You also need an acceptance that 'perfect' plants are not the ultimate aim in gardening, and an understanding that every insect is not out to get you. Creating vibrant, living ecosystems in our backyards will reward us with gardens that are rich and abundant, full of many forms of life.

Gardens that are regularly sprayed with pesticides, fungicides and herbicides, fed with large amounts of nitrogenous fertilizers and that have bare soil, actively create the conditions for pest explosions and lack the natural controls that prevent pest build-ups.

Good design is based upon the selection of plants suited to the climate and soil. Getting this right in the first place will reduce later pest and disease problems. As an example, the time of the year that rain falls can affect plant health. Plants that evolved in a winter/spring rain regime with a hot/dry autumn tend to be vulnerable to disease problems if the rain falls at a different time of the year. Grapes Vitis vinifera, tree lucerne Chamaecytisus proliferus and figs Ficus carica all evolved in a Mediterranean climate with a dry summer and will suffer fungal attack in a subtropical climate with a predominantly summer/autumn rainfall. 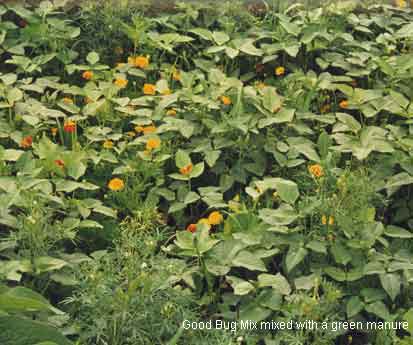 Healthy soil is a major factor in pest balance. Mulch protects the soil and creates habitat for insect predators such as ground beetles, centipedes and spiders. Organic matter increases biodiversity within the soil by providing food and habitat for beneficial microorganisms.

Crop rotation is a useful strategy for vegetable gardens as it prevents the build-up of soil-borne diseases and balances nutrient uptake. This is the practice of growing vegetables from different plant families in beds the following year. So tomatoes, potatoes or eggplants would not follow each other as they all belong to the same plant family, Solanaceae.

Green manures are crops grown specifically to build nitrogen and organic matter levels. When used as a crop rotation they can break disease cycles including root-knot nematodes and root-rot fungal pathogens. When BQ Mulch or marigolds are dug into the soil, chemicals released from the decomposing plants suppress these diseases. Find information on organic nematode control here.

Birds such as Robins, Wrens, Honeyeaters, Pardalotes, Willy Wagtails, Thornbills, Flycatchers, Warblers and Treecreepers are primarily insect feeders and help to control pest problems, including aphids, scale, caterpillars and grasshoppers. To attract birds provide safe nesting sites, free from predators and with privacy. Dense plantings of native shrubs, in out-of-the-way corners of the garden will provide important nesting sites for smaller birds, and as a bonus, can be chosen to provide nectar to attract nectar feeding birds such as Honeyeaters. Including prickly shrubs gives added protection from cats. 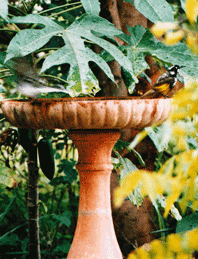 In an urban landscape nesting sites for birds that require hollow trees are few and far between. It can take 150 years for a tree to develop a hollow large enough to house owls, parrots, gliders, possums and small insect eating bats. Provision of nesting boxes by urban residents can meet an urgent need, and help to maintain a rich diversity of wildlife. Small, insectivorous bats are nocturnal feeders, and play an important role in the control of night flying insects, including mosquitoes. Sugar Gliders mainly eat insects, such as leaf-eating beetles, moths, grasshoppers and caterpillars; they also feed on sap-suckers that excrete honeydew, such as scale.

4. Water In The Landscape

Water is an essential element in the landscape, whether it is a birdbath or small pond. Providing a reliable source of water for birds allows them to nest in the garden. Birdbaths should be placed close to a nearby refuge of densely foliaged shrubs, to allow easy escape from predators. Fitting any cats with multiple, small bells, or a mirrored collar, help to prevent decimation of the wildlife population, as does restricting their wandering.

Small ponds encourage useful predators such as frogs, which need water to breed. Frogs are very active nocturnal animals that devour large numbers of pests. Dragonflies prey on flying insects as adults; their aquatic larvae feed on mosquito wrigglers and other water life. Avoid introducing goldfish to ponds, as they will eat the tadpoles. Native Pacific Blue-eye fish and Rainbowfish will do less damage to the tadpoles whilst still helping to control mosquito wrigglers.

The vast majority of insects occupy ecological niches without ever affecting people, less than 1% of the resident population of a garden could be considered pests. In fact, many of them are beneficial, being either predators or parasitoids of other insects. When a predator controls a pest it is termed 'biological control' and there are a variety of strategies for improving the effectiveness of biological control in the garden. Being able to recognize the 'good bugs' and adopting an 'innocent until proven guilty' attitude is a useful beginning. Some of the common 'good bugs' found in the garden are:

To increase the number of beneficial insects in the garden, try to provide them with food and shelter. Avoid spraying chemical pesticides and reduce the use of 'organic' sprays. Whenever a pesticide is used to control a pest problem it also kills large numbers of predators, disrupting the ecological balance. Many adult predators are nectar-feeding, so provide food for the 'good bugs' by growing flowers that are suitable. These are known as insectary plants and include:

Providing beneficial insects with shelter can range from rocks and logs as part of the landscape, to keeping the soil mulched, to incorporating perennial plants such as hedges, into the garden design. This will also increase the habitat for lizards that feed on beetles, cockroaches, grasshoppers, moths, silverfish, slugs and snails.

By regarding the pest alone as the problem, the opportunity is missed to see the real cause of pest problems, and to design our way out of them. The real problem is that our gardens are often devoid of habitat, regularly sprayed with biocides and full of plants that are not adapted to their environment. To solve our pest problems naturally we simply need to establish a garden using the principles of natural ecosystems.


Other Useful Organic Strategies to help with the control of pests and disease
Help with pest identification
How do you choose the right product?
Organic Citrus Care
Organic Rose Care
Plant Disease Control
Safe way to spray