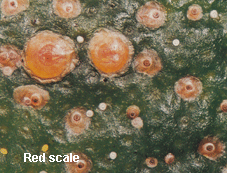 Scales are small sucking insects closely related to aphids, mealy bugs and whitefly. They tend to have small, round shells and are often found along the veins of leaves and the stems of plants. Because they are small and usually not moving, they often go unnoticed. Control of scales is important; as the damage they can cause is out of all proportion to their size e.g. Californian red scale (pictured) can seriously damage or kill small citrus trees.
Suggested Organic Strategies:

Common scales include black scale, pink wax scale, cottonycushion scale, San Jose scale, soft brown scale, red scale and white louse scale. Scale look like small bumps and can be mistaken for part of the plant, as adults do not move.
Eggs are laid under the scale shell and immature 'crawlers' emerge. Crawlers can be moved around by wind, by ants, or by hitching a ride on a bird's leg. Scale in large numbers cause leaf yellowing, leaf drop and dieback of twigs and limbs. In very large numbers red scale can seriously damage or kill young citrus trees. Some scales secrete large amounts of 'honeydew', for example in a eucalyptus forest this can sometimes be seen as a gentle sticky rain. The honeydew causes problems by sticking to the lower leaves where it is fed on by a black fungus called 'sooty mould'. This makes a plant look unattractive and interferes with photosynthesis. Honeydew also attracts ants, which feed on it. The ants can 'farm' the scale, protecting it from predators.

Enhancing the environment for the natural predators of scale is a long-term strategy with the benefits increasing over time. Natural enemies of scale include ladybeetles, lacewings, spiders and tiny parasitoid wasps (pictured). Many beneficial insects that feed on garden pests need nectar and pollen for food during part of their lifecycle. Growing a year-round supply of suitable flowers will maintain beneficial insect populations throughout the year, try planting a Good Bug Mix. Small insect-eating birds are also helpful in controlling scale; attract them by providing safe nest sites and a constant supply of water. Try to keep any birds visiting your garden safe from cats.

Physical and Cultural Controls
The first step is always to control any ants, as without their protection the abundance of natural enemies in an organic garden will usually be able to keep scales under control. Keep ants out of your trees by banding the trunks with horticultural glues or grease bands. Prune any low branches that are touching the ground and make sure tall stems of grass aren't providing an alternative route for the ants. On indoor plants small colonies of scale can be rubbed off by hand, wear garden gloves and dip a toothbrush or a cotton bud in a soap solution. In the garden very heavily infested twigs can be pruned off, dropped into a bucket of soapy water, then composted or mulched.

The best time to control scales is when the crawlers have recently emerged, as they are more vulnerable to organic sprays than the adults with their thick shells. Correctly identifying the scale will help you to time this exactly but mid-summer is common. Frenetic ant activity can indicate scale-hatching periods.

Insecticidal soap sprays such as Natrasoap work by blocking the breathing pores and dissolving the scales' outer covering so they dehydrate and die. Commercial soap sprays are based on potassium and will not harm beneficial insects and have a very low toxicity to people or pets. Oil sprays such as Eco-Oil kill all stages of scale insects by suffocation which is a physical impact rather than a pesticidal action. It has a low impact on beneficial insects.

If you plan to spray, wait for settled weather with little wind and no rain. Spray in the early morning or late afternoon to avoid burning the leaves and to reduce the impact on beneficial insects. Wettable sulphur or lime sulphur can be sprayed in winter to control white louse scale on citrus.