The Olive Lace Bug Froggattia olivinia is a damaging pest of olive trees. The severe leaf damage the bugs inflict can cause loss of vigour, yellowing of leaves, leaf fall and reduce fruit yield for the next 1 or 2 years.
The lace bug is a native pest from Australia which has not yet been found in other olive growing regions of the world; as a result there is little research available on organic control. The first clue that lace bug is present is a pin-head sized yellow spotting noticed on the top of the leaves. The small yellow spots are easy to see as they contrast clearly against the dark green leaf surface.

Lifecycle
Lace bugs have between 2 and 4 generations each season. The lace bug is a small, flat insect to 2mm long, with see through, lace like wings. The adults are light brown with patches of black or brown. The juvenile nymphs are spiny and much darker in colour. Both adults and nymphs are sap-suckers.
Eggs that have overwintered on the tree usually begin to hatch out in spring or late winter. Monitor the trees in early spring for evidence of insect infestation.

Biological Controls
Lace bugs are reported to have an egg parasite but this is unlikely to be present in many conventional olive groves, particularly if the ground is bare. Egg parasites are usually nectar feeders as adults and are more likely to be established in groves with flowering groundcovers. The Green Lacewing (available from Bugs For Bugs) is an insect predator native to Australia; it has been used successfully by olive growers to control the Olive Lace Bug.

Physical and Cultural Controls
It is believed that the healthier the orchard, the lower the incidence of lace bugs and other insects. Old or neglected trees that are drought or nutrient stressed are more prone to attack. To reduce the problems over time make sure that the trees are kept in good health.
Before spraying badly infested trees, carry out pruning to reduce tree height and open the canopy to make the spraying more effective. Lace bugs are not difficult to kill but it is difficult to get good spray coverage throughout a dense canopy.
Regular pruning will also open up the tree, improving airflow and the all-important access for insect predators such as birds. Pruning will help rejuvenate badly damaged trees by encouraging new shoot development.

Least Toxic Chemical Controls
The olive lace bug is difficult to control as it feeds and breeds underneath the leaf, it also multiplies fast. No chemicals appear to be currently registered specifically for this pest, although pyrethrum and insecticidal soap sprays are used overseas on other lace bug species. If a contact spray such as pyrethrum is used, it should be sprayed in the late afternoon to minimise damage to bees and beneficial insects.
It is important to apply insecticide soon after lace bug activity is first noticed, as populations can build up rapidly if left unchecked. Usually 2 sprays are needed, as the first spray will not kill the eggs, spray again in 10 - 14 days. Once the initial infestation is under control, regular monitoring is required every fortnight throughout the growing season. New infestations or 'hot spots' can occur regularly throughout the growing season, usually along the edge of the olive grove and close to the previous infestation.
Use of insecticides needs to be considered as a short-term response as nearly all types of insecticide will suppress the populations of beneficial insects and lead to increased pest problems.

General Strategies to Improve Pest Balance in Orchards
The best long-term response is to analyse why the olive grove is vulnerable to attack and lacking in natural biological control agents to maintain pest balance. The most common reason is lack of habitat for beneficials.

Re-design
In a single crop system such as an olive orchard, pest numbers can increase due to a lack of protective mechanisms. Careful re-design is needed to increase diversity. Often there is a lack of understorey in the nearby bush, which would normally be a habitat for natural predators of the pests.
Restore habitat by planting hedgerows to provide habitat, nectar and pollen for a wide range of beneficial insects. A thick planting of shrubs between the bush and the orchard, or around the orchard boundary will create niches for longer-lived predators of bugs such as birds, spiders, scorpions, assassin bugs, tachinid flies, chalcid wasps and ground beetles; they also act as a physical barrier to flying insects. These hedgerows also increase the effectiveness of hoverflies by providing shelter, as wind inhibits the activity of adult hoverflies. Look upon this plant barrier as your security fence - infestations of pests have to make it through this barrier to reach the olive trees.

Ground Covers
Cover cropped orchards support more soil dwelling predators and generally have a lower number of pests than bare or grassed orchards. Legume cover crops, which bloom over an extended period, support the largest reservoir of natural enemies. A combination of perennial and annual species can be used, with the aim of creating a meadow of flowering plants. Since mowing destroys beneficials, a groundcover requiring little or no mowing is best.

Attracting Birds
Improve the habitat for birds by providing safe nest sites, food and water. Dense plantings of native shrubs, in out-of-the-way corners will provide nesting sites; nectar rich plants, such as Grevillea sp. attract nectar-feeding birds, many of these include insects as part of their diet. Prickly shrubs give added protection from predators such as snakes and cats. Nesting boxes for birds, gliders and small insectivorous bats can fulfil an urgent need created by habitat destruction. Where possible retain dead, hollow trees as these are unsurpassed in the range of nesting sites they provide. Sugar gliders mainly eat insects, such as leaf-eating beetles, moths, grasshoppers and caterpillars; they also feed on sap-suckers, like scale, that excrete honeydew.
Poultry may also help, so keep either chooks, guinea fowl or ducks as they all eat large numbers of insects. Guinea fowl are a lot more feral than chooks, roost in trees at night and may be better at catching flying insects like the Olive lace bug.

Water
Providing a reliable source of water for birds allows them to nest. Homemade birdbaths scattered throughout an orchard should increase biological control. Small ponds encourage useful predators of insects such as frogs and dragonflies, which need water to breed. Frogs are very active nocturnal animals that devour large numbers of pests. Avoid introducing goldfish to ponds, as they will eat the tadpoles. Local Pacific Blue Eye fish and Rainbowfish will do less damage to the tadpoles whilst still helping to control mosquito wrigglers. Many beneficial insects require accessible water; their requirements can be met by frequent spraying of plants or a shallow edge on a pond. 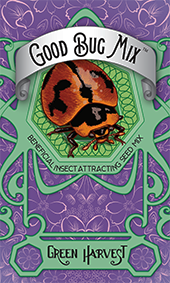 There are two general groups known as beneficial insects: predators and parasitoids. Predators such as the ladybeetle and lace wing directly attack and consume pests. Some ladybeetles feed on bug eggs. Parasitoids, usually tiny wasps, are more indirect, as they lay their eggs inside the pest. Parasitoids attack bug eggs and the adults are nectar feeders. Increase the numbers present by planting suitable nectar producing plants, try Good Bug Mix or coriander, dill, caraway and anise. To encourage beneficial insects, it is important to avoid the use of pesticides wherever possible. Organic sprays, whilst less toxic to humans, will still damage beneficial insects populations, particularly broad-spectrum contact sprays.