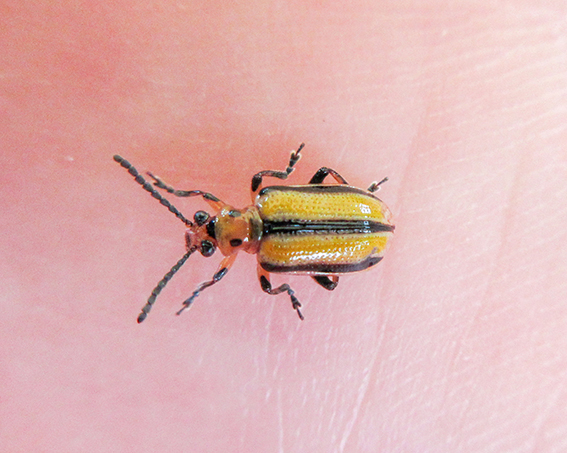 Lema daturaphila syn. Lema trivittata
Syn. Three-lined Lema Beetle
This leaf-eating beetle pest and its offspring are a menace to plants in the Solanaceae family such as potato, capsicum, eggplant and tomato. They are particularly fond of tomatillo and cape gooseberry. Both the pupa and adult stage overwinter in the soil and emerge when the weather begins to warm.
These beetles are around 7 mm long and can be identified by their golden yellow bodies with three black stripes running down their length. They have a reddish-orange head with black antennae and two black dots on their prothorax.
Females lay around 20 to 30 eggs at a time and larvae take about 2 weeks to develop. It is the grubs (grubs being the correct name for beetle larvae) that cause the most damage to plants as they feed greedily. Three-lined potato beetle grubs can be mistaken for droppings as they have the unlovely habit of hiding beneath a fecal shield, which is a small pile of their own excrement carried on their back. After feeding the grubs drop to the soil to pupate and emerge as adults. It's important to keep on top of Three-Lined Potato beetle infestations as their numbers can build up very quickly. Females lay a sizeable number of eggs and due to their quick maturation time, there can easily be two generations a season. 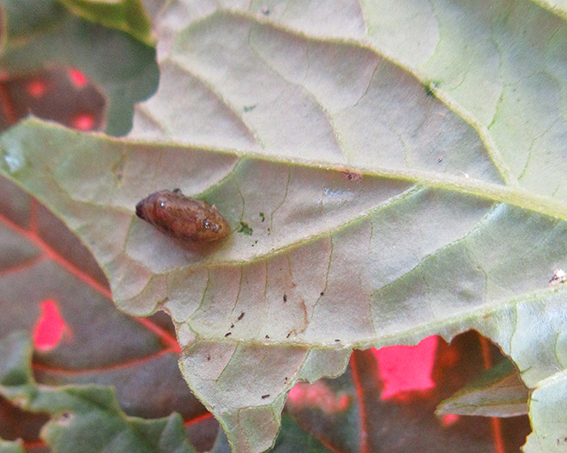 Suggested Organic Strategies
To keep them in check, eliminate any Tomato family (Solanaceae) weeds such as blackberry nightshade from the garden to keep alternative food sources to a minimum. Protect your plantings of potatoes and tomatoes under exclusion netting. Encourage predators in the garden including lacewings, assassin bugs and spiders. Parasitoid wasps, attracted by small nectar-rich flowers such as Sweet Alice, will parasitise the eggs. When the beetles appear, pick them off plants by hand and drop them into soapy water. As a last resort use a pyrethrin spray.