This information should help you decide which climate zone you live in: you need to know this to choose the best plants for your area and also the correct sowing time. People don't always realise that living in a certain place actually determines the type of garden you will have and the plants that you will grow. If you grow your own vegetables and fruit then where you live determines how you eat or should.

Gardening can be hard work but adding a fight with nature turns it into a constant uphill battle that is going to be lost. Always growing what does best in your area at the right time of year is one of the cornerstones of organic gardening. Many pesticides and fungicides exist because of this simple fact, that gardeners persist in trying to grow plants that are unsuitable to the climate zone. These plants are unhealthy, they suffer stress from trying to grow in the wrong place, and there is a constant pest and disease pressure on them.

If you are new to gardening then concentrate on what does well in your area. To find this out you need to do extra homework; the time you put into understanding your local climate and its variations in detail will stand you in good stead. Check the Bureau of Meteorology, local gardening groups and local newspapers to build a better picture of your local area.

Keeping a gardening diary of when you sow what, the date the first and last frost occurred, particular pest outbreaks, will help a newcomer to gardening to get a handle on this. It will get simpler over time, terms gardeners throw around will become clear and the joy of gardening, the dance with the seasons, the pride and pleasure of growing food and the sheer beauty of gardening will take over.

Microclimate
Understanding your climate zone is just the beginning, every garden has local 'microclimate' variations. If you live on a hill, each aspect - north, south, east and west - will have slightly different climatic variations. The eastern side will get morning sun, which is not as hot as afternoon sun but more likely to cause frost damage. The southern side will be much cooler than the northern. The western side will be hotter and drier. The wind exposure will also be different: the eastern side may receive cooling breezes; the southern, destructive strong winds. Lower areas will receive more frost usually than higher areas, as the cold air drains downhill at night and settles in the low-lying areas. 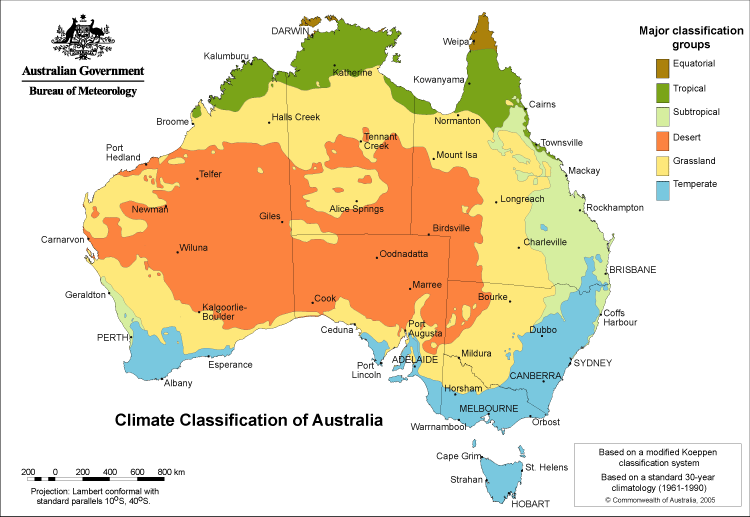 Tropical and Equatorial Zones
Where
The Hot Humid Zone includes the coast of the Northern Territory, Western Australia north of Broome, Cape York and the northern part of the Queensland coast above Mackay.
Characteristics
The temperature is high all year round; no frost occurs; average annual lowest temperature is 15°C. It is distinctive for its monsoon or 'wet season' and 'dry season' with most rain occurring in the 'wet season', which corresponds to summer in southern Australia. The wet season is hot and humid with an average January maximum temperature greater than 30°C. The 'build-up' to the wet season (November) is the least comfortable time of year; temperatures are generally at their highest and humidity is also high, without the benefit of cooling rainfall. Living in the tropics has unique challenges for new gardeners, particularly if they didn't grow up there. It is hard to understand that monsoon rain can be a battering force; that pest numbers can explode in days with a crop completely destroyed, that termites will attack the fruit trees you plant. Understanding what to plant is challenging and will mean accepting a whole range of new vegetables as part of your diet but it can be done. Mainstays of food production in a tropical garden are perennial plants including sweetleaf, winged bean, sweet potato, choko, yams, kangkong and pawpaw. Leonie Norrington's book Tropical Food Gardens is a very good place to start and essential reading for all tropical gardeners. Information on seeds for hot humid areas.
Download a Vegetable Sowing Calendar for Darwin NT.

Subtropical Zone
Where
The subtropical zone includes the eastern coastline from Coff's Harbour in northern NSW, Brisbane and north to Mackay. In WA it is approximately the coastline north of Exmouth to Broome and inland to Halls Creek.
Characteristics
It is a mild climate, which is why South East Queensland is the fastest growing area in Australia. It has a low winter rainfall and reliable summer rainfall; high humidity from November to March; frosts are rare; average annual lowest temperature 10°C. Warm, humid, wet summer, average January maximum temperature less than 30°C. Living in the subtropics doesn't mean that temperate vegetables will not grow, it just means you have to grow them in the winter and early spring and by November be switching to planting tropical vegetables to grow over the wet season. It is important to plant cool season crops so they have time to mature in the cool weather; if they are planted too late they will bolt to seed as soon as the weather warms up in spring. The subtropics grows tubers extremely well, particularly plants like sweet potato, cassava, Queensland arrowroot, yacon and jicama. It shares with the tropics a wide range of perennial vegetables that are the staples of the subtropical vegetable garden.

Desert and Grassland Zones
Where
Central Australia.
Characteristics
Inland Australia is a challenging environment for gardeners as it has very high summer temperatures; very high evaporation; a dry summer with prolonged drought is common. The northern part has a hot, dry summer and mild winter; the southern part a hot dry summer and cold winter with an average annual lowest temperature of -5°C. Establishing a garden area under shadecloth can make all the difference in preventing lettuce and other greens bolting too soon.
Download a Vegetable Sowing Calendar for Alice Springs.
Vegetable sowing calendar Gardening Australia has a very helpful interactive sowing guide for the western districts of Victoria: http://www.abc.net.au/gardening/vegieguide/.

Temperate Zones are often further divided along rainfall and minimum temperatures lines as a guide for gardeners. (The above map shows all three as one zone.)

Warm Temperate Zone
Where
The warm temperate zone includes inland Queensland, New South Wales tablelands, the coastal region south of Sydney and north to Coff's Harbour. In Western Australia it is approximately the coastline south of Exmouth to Geraldton and inland to Meekathara.
Characteristics
Cool winters with light frost, usually non-existent on the coast. The ocean moderates temperature allowing coastal zones in warm temperate zones to grow a range of plants including subtropical ones. The rainfall is reliable year round; average annual lowest temperature 5°C. Warm summer, average January maximum less than 30°C. Temperate zones experience the distinct four seasons. Where frost does occur it is both a limitation and a blessing as it can have a significant effect of reducing pest numbers of fruit fly etc. Frost is also said to sweeten certain vegetables such as parsnips and cabbage. A true winter induces dormancy of plants including herbs such as comfrey and the plants seem to do better for the rest of the year. A winter chill factor allows for successful growing of fruit trees that require this.

Mediterranean Zone
Where
The mediterranean zone includes much of southern coastal Australia from Melbourne, Adelaide through to Perth.
Characteristics
It is shares many of the features of the Warm Temperate Zone, except for rainfall which is predominantly in winter with a low summer rainfall. The winter is cool, average annual lowest temperature 5°C. The summer is warm but with a low humidity which favours the growing of grapes and figs that are damaged by moisture and prone to fungal disease in wetter areas.
Gardening Australia has a very helpful interactive sowing guide for South Australia: http://www.abc.net.au/gardening/vegieguide/.

Cool Temperate and Alpine Zone
Where
This includes Tasmania, Canberra and the ACT, all high mountain areas including the Granite Belt of South East Queensland, the high areas of the New South Wales tablelands (Armidale, Glen Innes), the Southern Tablelands of New South Wales and the high areas of Victoria.
Characteristics
Cool temperate zones experience cold winter temperatures with heavy frosts during the cooler months: spring is a longed-for event. Summers are warm and mild, average annual lowest temperature -5°C to 0°C. Alpine areas experience snow. One of the advantages of this zone is that pest problems are lowest, as is pest intensity. The chill factor allows the growing of fruit trees like cherries that need significant winter chill. The summer growing season is short so getting seeds started early using a bottom heat propagator is a good idea. For in-ground planting generalist sowing guides can be a bit of a trap, as it may be late October, early November before the soil is warm enough to successfully sow beans. New gardeners should begin by growing fast cropping vegetables until they develop ways of managing the seasons and extending them. It is always disappointing to have the tomato and eggplant bushes loaded with fruit just as the first frost hits. Using frost covers such as Vege Net can help.
Gardening Australia has a very helpful interactive sowing guide for Tasmania: http://www.abc.net.au/gardening/vegieguide/. 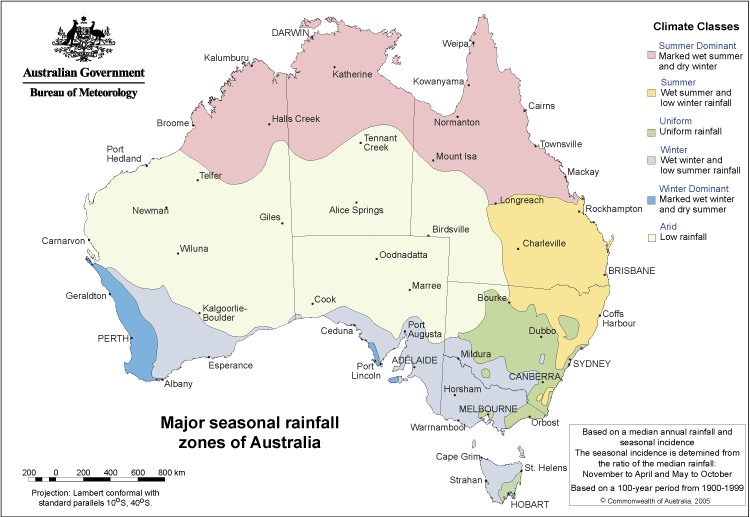 Warm Season and Cool Season Vegetables
These are phrases commonly used in garden books and magazines and of course, on our seed descriptions and packets. For a new gardener it can be confusing.

Basically vegetables evolved in different places on the planet so they have different tolerances to things like frost, temperature and humidity. This then determines the time of the year they should be planted to give them the closest possible growing conditions to their native area.

We use the term 'cool season' and 'warm season' only for annual plants - plants that grow, flower and die within a single year. For perennials, plants that live many years, we categorize them by their climatic requirements. So knowing that globe artichoke is native to the Mediterranean also tells you that it prefers a dry summer and is unlikely to do well in areas with wet summers like the subtropics and tropics.