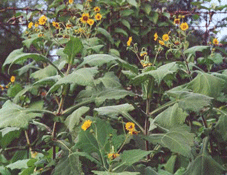 AVAILABLE FOR PURCHASE: buy or get emailed when available

YACON GROWING INFORMATION © Frances and Jeff Michaels
BOTANICAL NAME: Smallanthus sonchifolius (formerly Polymnia sonchifolia)
COMMON NAMES: It has a variety of common names including the descriptive sweet-root, Peruvian ground apple, strawberry jicama, Bolivian sunroot, llacon, groundpear, pear of the earth. We prefer to call it yacon as this is the name it is mainly called in its native South America and it avoids confusion with Jicama - Climbing Yam Bean Pachyrhizus erosus, another uncommon but very tasty root vegetable.
FAMILY: Asteraceae

PLANT DESCRIPTION
We have been growing Yacon for many years and it is one of our favourite vegetables, a 'winter treat'. Yacon is native to Colombia and Ecuador and is a hardy, attractive herbaceous perennial that yields a large harvest of tubers. The tubers have an appealing crunchy crispness that is a cross between apple and watermelon, with overtones of sugarcane. It is always a bit tricky describing the taste of a new food as we are forced to compare it to familiar foods but generally it gets a very positive response, especially from children. As a member of the sunflower family, yacon can grow to 2 metres in height with small, daisy-like yellow flowers. When growing it is similar in appearance to Jerusalem artichokes but is not invasive in the same way.

PLANTING DETAILS
Yacon actually produces two types of underground tubers, reddish rhizomes directly at the base of the stem, which can be eaten when young but are mainly used for propagation and the larger brown tubers, which are mainly eaten. When harvesting we separate the reddish rhizomes from the tubers and wash off any soil, taking care not to break the skin. The brown tubers are dried in the sun and then stored. The reddish rhizomes are kept out of the sun and covered with slightly damp sand, sawdust or cocopeat to stop them drying out and put aside for replanting in a dark, dry place. As soon as the rhizomes begin to sprout it is time to plant. Prepare the soil by loosening well with a fork and working in compost. To plant, cover a large rhizome which has several sprouts, with soil to a depth of 3 cm. Mulch well, yacon will grow up through the mulch, just like potatoes. Little weeding is needed as dense shade is created as the yacon grows. Plants are large and vigorous, so space them at least 0.5 metres apart. Yacon grows fast even in poor soils but crops best in rich, friable, well-drained soil. Yacon can be planted all year round in frost-free areas as it is day-length neutral. It appears to be drought tolerant compared to other vegetable crops and so far, pest-free. For cold areas of Australia the rhizomes can be started in styrofoam boxes in a greenhouse or on a warm verandah and planted out when frost is past. 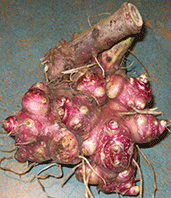 HARVEST
The plant takes 6 - 7 months to reach maturity. After flowering top growth withers and dies back and the tubers are harvested. They resemble dahlia or sweet potato tubers, on average weigh about 300 g but can weigh up to 2 kg. Once the soil starts to heave at the base of the plant, dig around to 'bandicoot' a few early tubers to extend the harvest season. The tubers continue to sweeten as the plant dies back so the main harvest should only take place once all the top growth is dead, usually by May. Don't leave it too long though, especially in areas that have mild winters, as the plant will start to shoot again as the weather warms up and the days get longer. The plant needs to be dug carefully to avoid damage to the crisp tubers. After separation from the central stem undamaged tubers can be stored in a cool, dark and dry place with good air circulation for some months. The average sugar content of the tubers increases during storage because of starch conversion. They can also be exposed to the sun for up to 2 weeks to accelerate the sweetening process.

EATING
We prefer to eat yacon raw. First remove the outer brown skin and inner white skin by peeling with a knife as the skin has a resinous taste, to reveal the amber coloured sweet crunchy flesh. Like all tubers there are no seeds to remove, so it is quick and easy to prepare. Chop the tuber into chunks and add it to green salads where they impart a great flavour and texture. It can also be used in potato salad and Waldorf salads. When cut into long strips, they make an interesting addition to a plate of raw vegetable crudites for dipping into your favourite guacamole or cream cheese dip. It can also be boiled, steamed or baked with other vegies. In cooking they stay sweet and slightly crisp. If boiled 'in the jacket' the skin separates from the flesh and can be peeled off like a boiled egg. Yacon can also be used in a dessert crumble or pie with apples, pears or choko. The tubers juice well in an electric juicer and can be used to sweeten other juices or used in juice combinations. In the Andes, they are grated and squeezed through a cloth to yield a sweet refreshing drink. The juice can also be boiled down to produce a syrup. In South America the juice is concentrated to form dark brown blocks of sugar called chancaca. The young stem can be used as a cooked vegetable. Nutritionally yacon is low in calories but it is said to be high in potassium.

Yacon tubers store carbohydrate in the form of inulin, a type of fructose, which is a suitable food for type II diabetics. Type II diabetics are not insulin dependant and so can control their blood sugar levels through diet. Plants with the sugar inulin such as Jerusalem artichokes and yacon can be useful additions to their diet. In addition to providing living enzymes often lacking in a constricted diet there is a deep sense of satisfaction in being able to have a sweet juicy treat. We have had reports from type II diabetics in our area that eating a small piece of yacon has lowered their blood sugar levels, but we are not aware of any research that would confirm this.

With the ease with which yacon juice can be extracted there is a possible future potential as a commercial crop to make sucrose-free foods for diabetics and dieters. Just like sugar cane, the sugars can be concentrated to obtain a high-fructose sweetener. These sugars also have potential in being used to make a bio-alcohol for industry.

ANIMAL FORAGE
Yacon has potential as a forage crop for animals, the leaves have a protein content of 11-17% and when cut the foliage sprouts again from the underground stems. The tubers may be a good cattle feed, for inulin is rapidly metabolised by ruminants. Additionally, the plant may be useful in agroforestry, because it grows well beneath a canopy of trees. It is used as a soil protector because of its ability to maintain itself as a perennial species, especially in dry agro-ecological areas. In this case don't expect a yield of tubers but grow it instead for animal forage. We have numerous plants tucked into the landscape, which are attractive despite receiving no water. For best yields of tubers however, a deep rich well-drained irrigated soil is necessary.

NEW CROP POTENTIAL
As a new crop yacon has potential for small crop growers. We suggest you offer your crop to a local restaurateur, take some prepared pieces and explain how it can be used. Restaurants with a desire to provide fresh ingredients and a willingness to experiment will be at the leading edge of demand for this versatile crop. By selling to the end user you will get a higher value return. Other direct selling methods to consider include selling tubers to a juice bar or health food shop with juicing facilities. Selling at the local produce markets is a sure hit if you always offer free taste samples. This will also attract people to your stall.

Not to NORFOLK ISLAND, NT, SA, TAS or WA
SORRY but due to quarantine restrictions between Australian States no plants at all can be ordered by residents of Norfolk Island, Tasmania and Western Australia. These restrictions are very important as they prevent the spread of plant pests and diseases. No potatoes, garlic, shallots, strawberries or tubestock can be sent to South Australia. No tubestock can be sent to Northern Territory.