Everyone knows the old joke: what is worse than finding a worm in your apple? Answer: Half a worm. The saying refers to the larva of the Codling Moth (Cydia pomonella), which originated in Europe but is now found in most countries that grow apples. It also attacks pears, nashi pears, quinces, and occasionally walnuts and stone fruits.
Suggested Organic Strategies:

Life Cycle
In early spring the moths emerge about the time the fruit trees are in full bloom. Tiny, pinhead-sized eggs are laid by each female moth after dusk - usually on leaves - once the temperature is 15°C or higher. The eggs hatch in about 10 days. The tiny caterpillars may feed on leaves for a while before moving into the fruit. The caterpillar chews its way into the fruit core, where it feeds for three to five weeks. When it leaves the fruit and moves down the trunk and branches, it searches for a suitable place to spin a cocoon. This might be under loose bark, in a crevice, or in the ground. As the weather begins to cool, the last larvae do not pupate immediately but remain in thick, silken cocoons for some months. There are usually two to three generations a year in Australia.

Control measures need to take into consideration whether the pest problem is well-established with a high number of pests present, or whether it is a new orchard with a relatively small pest population. Other host plants nearby such as crabapple or ornamental pear can limit the effectiveness of some strategies. The most useful strategy of all is to keep the trees small so the fruit can easily be checked for damage, good spray coverage is possible and covering the fruit with bags does not involve risking life and limb on a ladder. For new orchards it is best to only plant fruit trees on dwarf or semi-dwarf rootstock. Choosing early-maturing varieties of apples will avoid a third-generation of codling moth, when pest numbers will be at their peak. 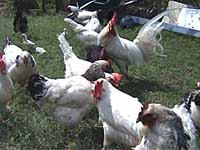 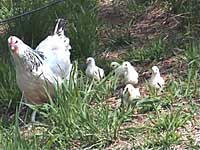 Physical and Cultural Controls
Least Toxic Chemical Controls
A spray program is only effective if it is timed correctly with two aims:
1. To kill the tiny caterpillars before they enter the fruit. This spraying should start 17 to 21 days after full bloom, which is about 10 days after petal fall.
2. To kill the adult moths hiding on the tree. This spraying can begin at petal fall. Spray under the foliage and in bark crevices where the moths may be hiding.

It is worthwhile to spray before bagging the fruit, especially if the pest problem was significant in the previous year's crop. If you are using a Codling Moth Pheromone Trap and are catching moths, then this is the best guide of when to begin spraying. Spraying too early will adversely affect pollination by bees and may kill them. Breakthrough for Commercial Orchards
Bio-insecticide: a biological control is now available in Australia for commercial apple orchards and is considered an acceptable organic control, however, organic growers should check with their certifying organisation before using. Grandex is based on codling moth granulosis virus, it is highly selective, only targeting Codling moth and Oriental fruit moth. Currently it is not available for home gardeners.