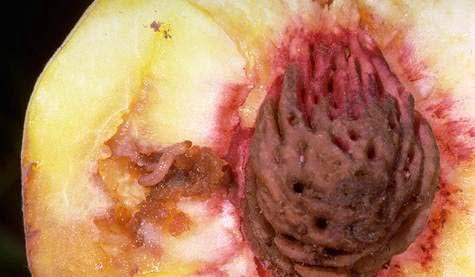 Oriental fruit moth (OFM) Cydia molesta is native to northwest China, it was introduced into eastern Australia at the beginning of the 20th century, and so it has been here a long time and is well established. Oriental fruit moth is also known as the peach tip moth and is a close relative of Codling moth Cydia pomonella. It attacks the young shoots and fruit of stone fruit but quinces, pears and apples may also be damaged.
Suggested Organic Strategies: 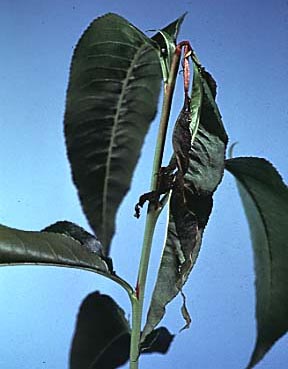 Lifecycle
The adults are small, grey coloured moths. They are rarely seen in the orchard during the day, but may be seen in mating flights near the treetops in the very late afternoon on warm days (above 18°C). This could be any time from August to early November. After mating egg laying will occur on twigs and leaves. The eggs are small and round, cream in colour and about 0.7 mm in diameter.
The newly hatched larvae (caterpillars) burrow into the young succulent tip shoots to feed for up to four weeks during the spring. The young shoots soon wilt and collapse, producing gum as they die. The mature larva, which is now pinkish with a brown head, and about 12 mm long, searches for a suitable cocooning site, usually high in the tree near where it has been feeding. This larva spins a cocoon and pupates immediately, to emerge as an adult, between the middle of November and early January.
This second generation may attack shoots; green fruit or ripening fruit, depending on the hardness of the shoots and the stage the fruit is at. Often damage to ripening fruit is only noticed when the fruit is cut. The damage maybe confused with damage caused by codling moth or fruit fly. Depending on the area there can be 5-6 generations over the summer. The complete lifecycle in summer, from egg to adult, is about 33 days. Moths, caterpillars, eggs and pupae (cocoons) can all be present at the same time in an orchard from September to April.
The last summer generation of mature larvae search for a suitable hiding-place for the winter, usually under bark near the base of the tree or in leaf litter on the ground. When they have chosen their overwintering sites they spin their cocoons and stay in this state until late winter or early spring, when they emerge as moths.

Dipel contains Bacillus thuringiensis, or Bt for short; it is highly effective and selective against most species of caterpillars. This biological control is a bacterial stomach poison for all caterpillars, which is mixed with water and sprayed onto foliage. It must be ingested by the actively feeding caterpillar, which dies 3-5 days later. It is totally safe to beneficial insects, bees and mammals. Bt is broken down by sunlight within a few days; so repeated applications may be necessary.